Time to lose patience?
To be fair the Woodford Patient Capital Trust (WPCT), launched in a frenzy of marketing activity in April last year, has been running for only just under 18 months; hardly long enough to judge a trust investing in early stage biotech and ‘disruptive’ early growth companies. Raising over £800m, the idea sold itself; Neil Woodford’s’ excellent long term record in Equity Income alongside some exciting small growth companies with vast potential; ‘Championing growth and supporting the best of British’ as the website says.

Nothing boring here
When I first heard about the trust, I thought that there was going to be an element of the boring staples of Woodford’s previous success (tobacco and big pharma for example) alongside the biotech and early – growth companies. But it turns out that the leavening of early stage relates to ‘some’ high conviction mid and large capitalisation ideas. As far as I can see in the current top 20 holdings which make up 57% of the total, there are no mid cap or large cap companies, at least outside the Tech and Healthcare sectors.

Some early crashes
And the trust has had a number of early problems. Of the top five investments disclosed at 30.06.15, Prothena, Verseon, NorthWest Biotherapeutics, Proton and Circassia, at least three have had major issues. The Verseon price seems to be down about 25%; NorthWest has almost been wiped out in a financial scandal and Circassia lost nearly 65% of its value when its cat allergy drug trial failed. It may be in the nature of early stage investing that the problems come first before the value elsewhere is evident. There must have been some successes because the NAV is only down about 6% from launch.

The chart below compares the share price performance of WPCT since launch with the BioTech Growth Trust (BIOG) and the FTSE All Share. 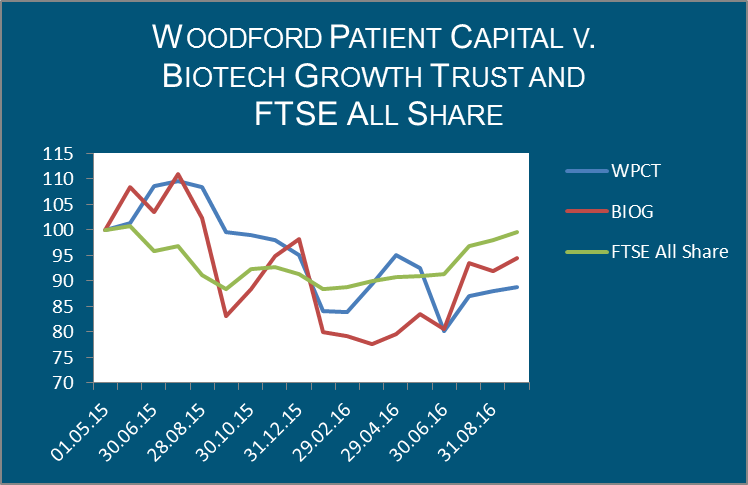 The Biotech Growth Trust (BIOG) is quite a different beast to WPCT; it invests in some of the giants of the US biotech industry, such as Amgen and Biogen, already successful and profitable companies which clearly have less scope to grow than Woodford’s early stage companies. On the other hand the adviser to BIOG is Orbimed whose website claims: ‘We have been investing globally for over 20 years across the healthcare industry: from early-stage private companies to large multinational corporations. Our team of over 80 distinguished scientific, medical, investment and other professionals manage approximately $15 billion across public and private company investments worldwide.’ I can’t help thinking this might give them the edge over Woodford’s Oxfordshire based  team when it comes to finding the best new opportunities.

Conclusion
After a strong period of growth to mid 2015 – just about the time WPCT was being launched – the Biotech sector has been relatively weak recently. This partly is perhaps a natural correction; but also likely reflects concerns that a Hilary Clinton led US government would be tough on pharma and healthcare companies. However, it may be that her bark is worse than her bite. For long term growth investors or regular savers, this may be a good time to look at the biotech sector.

At the time of writing WPCT (91.7p) is on a discount of only 2%; for BIOG (688) it is more like 7%. Although we have no insight into the value that may well lie in the WPCT portfolio, we don’t think the level of its discount is sufficient to compensate for the number of unquoted companies, the early stage nature of the investments and the relatively unknown track record in this particular sphere. We also have some concerns about one company, Prothena, accounting for over 16% of assets. For those looking to dip their toes into the sector, we would therefore prefer BIOG; nonetheless current holders of WPCT may well be advised to stay put, but be prepared for an exciting ride!

This research has been produced by David Liddell, chief executive and major shareholder in IpsoFacto Investor.com Limited which has approved this research.  David may have equity holdings in any or all of the stocks listed.

The information contained in this research has been obtained from sources that IpsoFacto Investor.com Limited believes to be reliable and accurate.  However, it has not been independently verified and no representation or warranty, express or implied, is made as to the accuracy or completeness of any information obtained from third parties.