What effect will the US election have on your investments?
Does it matter? In an article for the Telegraph today entitled ‘Trump win need not be as bad as markets fear’, Roger Bootle argues that particular politicians rarely have much effect on the course of an economy – ‘ideas matter more’ – so ‘Mr. Trump is not bound to be a disaster’. What is important are the advisers with which he surrounds himself and the ‘restraining’ influence of office, as well as the separation of powers inherent in the US constitution; ie. Congress can stop him doing anything too mad. There are of course merits in this argument and it is generally true that politics does not tend to impact on markets that much over the long term. But I do have a problem with the view in this case as I suspect much the same was said about the German elections in the early 1930s – and they did not end well.

He’s really a nice guy
I heard a variant of the Bootle argument put forward by Conrad Black on a recent BBC Question Time; this was to the effect that Trump was actually a pretty decent guy, did not mean half the things he said but had cleverly recognised how to appeal to the white blue collar male electorate that he needed in order to win. Again, some of the British establishment said the same sort of thing about Hitler in the 1930s. I am not for a moment suggesting that Trump is really Hitler-like – but there are some disturbing echoes around racism and immigration. It also seems unlikely that, having made it to President, he is not going to want a second term; surely disappointing his supporters by suddenly turning into a ‘reasonable guy’ would be disastrous for his re-election prospects.

Markets have made it fairly clear that they are uncomfortable about a Trump win. The chart below tracks the weekly S&P 500 versus the FTSE 100 since the beginning of September. 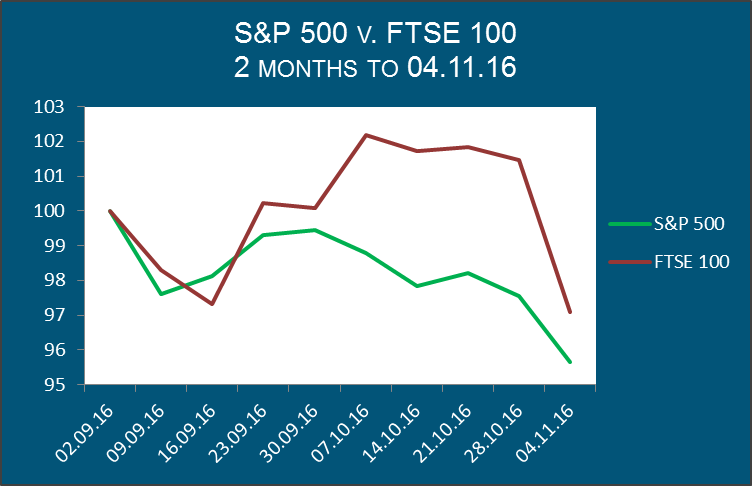 While the FTSE 100 has outperformed the S&P over this period, it is unlikely to be immune if there is any large movement in the S&P following the election. The first sell off in the S&P 500 in early September had more to do with concerns about the Federal Reserve raising interest rates; there was a rally around the obnoxious Trump video release and then the recent decline mirrors the fall in Clinton’s poll ratings after the surprise announcement by the FBI that they were re-opening the investigation into her emails. This morning (07.11.16) the FBI have equally surprised by issuing an ‘all clear’ signal – and markets are rallying as a result. At the time of writing the FTSE 100 has gained nearly 1.5% – the US market is not open yet – but presumably will rally as well, other things being equal.

Already in the price?
So how much of the fear of a Trump victory is already priced in? It seems unlikely that we will have a Brexit moment – ie. markets collapsing because of the sheer surprise of the outcome – were Trump to win. As an aside is it wise for Hilary to be using the strapline ‘Stronger Together’? I seem to recall that did not work very well for Remainers. Particularly in recent days markets and commentators have confronted the real possibility of a Trump win, although the betting markets are still pretty confident about Clinton, not that they were much of a guide for the EU Referendum. Betting odds are offering 9/2 on a Trump victory – although there is quite a wide margin – some are as low as 3/1. Hilary’s most generous odds are 2/9 on.

Moving markets?
There are four potential outcomes as set out in the table below – there are actually more – but for simplicity we ignore a kind of ‘hung’ situation, where the outcome is in doubt or disputed – there is only one way the markets are going in that situation. It is almost as important which party wins or retains control of Congress (ie. the Senate and the House of Representatives) as to who wins the Presidency. The Republicans are in control at the moment and most commentators think they will keep their majorities. Just for fun we have guessed the probability of each outcome, but there is nothing scientific behind this. We have also put what is the conventional wisdom about the market reaction to each outcome; and some quantification of the market’s view of the longer term effect on US equity valuations.

If Clinton wins and the Democrats also win Congress, although there may be initial relief at not having Trump, markets may fear a strong fiscal stimulus plus tax hikes; interest rates may rise more sharply in 2017, so longer term equity valuations may not benefit that much. A Clinton win plus Republican control really just means much of the same as we have had- a ‘third Obama term’ as some have called it. Unless Hilary can overcome partisan feelings, nothing much will get done, but the economy should carry on growing at a moderate rate.

If Trump wins with Republican control, it seems to us there are wide possibilities. Some commentators think – ignoring international relations – that the combination of tax cuts and large infrastructure spend could be good for equities longer term – certainly cuts in corporation tax generally help equity valuations; the main beneficiaries may be smaller cap US stocks focused on the US domestic economy. The problem is that you can’t ignore international relations and a Trump win would mean that the world had just become a much riskier place – meaning equity valuations should be tested. The final option is exceedingly unlikely and would probably be the worst received by markets; a frustrated Trump in the White House is a frightening prospect.

So enjoy Tuesday night – if all goes to plan we should know the result around about 4 am our time.