Has the stock market played all its Trump cards?

Well, we got the volatility bit right, if not the result. The FTSE 100 opened yesterday (09.11.16) down 2% but soon rallied as investors digested Trump’s conciliatory tone in his winning address. It finished up 1%. The Japanese Nikkei had fallen 5% overnight. Today, so far we have had something of the reverse; starting up another 1%, the FTSE 100 is at the time of writing down 0.4%.

Moreover, there are some quite big moves in individual stocks; British Aerospace, already up 6.7% yesterday, at one point this morning had gained another 7% to 630p, as investors celebrate the prospect of increased US defence spending. Yesterday the pharma stocks rallied as the Clinton threat to control drug prices faded, but today are selling off. The big gainers today are the more economically sensitive stocks and particularly financials, which should be the beneficiaries of higher long term interest rates. Prudential is currently up 8% and Legal & General (happily in our top five equity portfolio) 4.5%. In contrast the so-called bond proxies, the likes of Tobacco (Imperial Brands and BAT) and National Grid are getting hammered. US ten year yields rose yesterday to 2% from 1.86%. 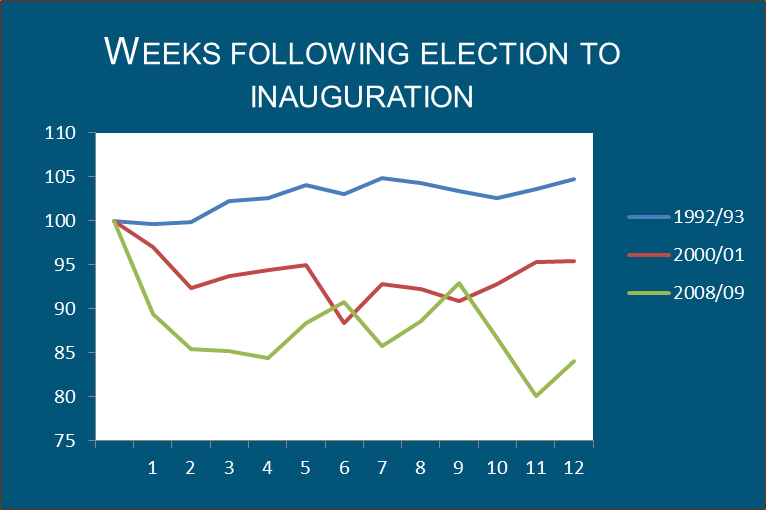 Under the prospect of both Bush and Obama, the market fell; whereas in the pre-Clinton era the S&P gained. However, it may be that these were rather unusual periods; in 1992/93 we were just coming out of the early 90s recession and had had the first Gulf War. In 2000/01 we were in the middle of the dotcom bubble bursting; 2008/09 was the height of the financial crisis.

So we may not learn much from this. Out of interest, the Clinton presidency finished up 340%, the Bush down 30% and Obama (to election night) was up 212%. Of course the starting points were fairly significant in these results!

How might it pan out?
As we pointed out before, the only real thing we can be certain about is that uncertainty has increased; not only about the actual policies to be pursued, but about what is likely to be passed through Congress. In theory of course President and Congress majority belong to the same political party; in reality the latter is dominated by fiscal conservatives and it remains to be seen how they would react to the possible rolling of the fiscal dice by Trump (ie. a splurge of infrastructure and defence spending accompanied by personal and corporate tax cuts).

Oxford Economics (OE), the consultancy, expects horse trading between President and Congress to result in only a modest fiscal expansion in the short run, and a neutral effect in the long run. They don’t expect the more extreme trade tariffs to be enacted, but they do expect some protectionist measures which will both act as a brake on growth and be inflationary. Overall, partly to do with heightened uncertainty, they expect GDP growth to be lower than otherwise would have been the case; therefore more pressure on corporate profitability.

Trumped up charge
It seems likely to us that the Trump presidency will accelerate US economic trends that were already evident but at a higher risk; so growth could gain momentum driven by increased government spending, but interest rates (and inflation) are likely to be higher. It was always something of a race between whether more normalised economic growth could be restored before interest rate rises choked off the recovery. This now may be played out more quickly but the outcome remains in doubt. Overlaid on this is the greater threat of some disturbance in international relations which could bring everything to a juddering halt. A lot may depend on Trump’s advisers and how he conducts himself in the early months.

Conclusion
We expect stock (and bond) markets to remain volatile and there may be a premium on staying close to the market, both to take opportunities and avoid catastrophes. The trend already evident of the market favouring economically sensitive stocks over defensives and bond proxies may continue; this should throw up some interesting possibilities of switching into defensives at some point. Imperial Brands (previously Imperial Tobacco) a month ago was on a P/e of 16x; today it is a much more attractive 13.6x. Bring on 12x and we would start to get interested.